Wayne and Anne Wicklund have found an area of service that has been long neglected. In 2001 they acquired a puppy to help them cut back on the hours they worked. When you have a large breed puppy you have to spend time grooming and exercising. Within weeks the dog Snow started doing odd movements and sounds. It was then that they realized that Wayne was beginning to lose his hearing - it didn't take long to realize that this invisible handicap was made more difficult by people not realizing he could not hear - even his friends would say "He looks like he can hear!" This lead to the many products you can find at www.hearingimpaired.net that let other people know you can't hear.
Wayne had been a Master Trainer and recognized that the dog needed to be taught to alert to certain things that applied to Wayne's needs - and so he began to train. However, they quickly learned that there was no standard that would allow you to take a dog into public access without concerning store and restaurant owners, hotels and medical facilities. Since Snow was originally a "hearing" dog, the standard they used was their logo for hearingimpaired.net Inc 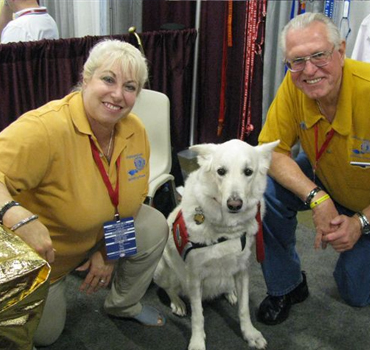 After a time, Wayne became ill with lung disease. The bond between them was so strong that Snow morphed into an asthma dog and continues to save Wayne's life daily. He is very allergic to cats and when in the vicinity of someone with cat dander on their clothing he becomes extremely ill - Snow heards Wayne away from any area that is harmful to his breathing. Then Wayne had a medical accident at a local hospital in October of 2006 which resulted in mobility, motor skill problems. and thinking processing problems. Snow helped him to walk again and now steadies him and helps to pull him up from sitting positions, and pulls him while walking. When Wayne has problems thinking, Snow recognizies this and takes over. if Snow knows the area, he will walk Wayne home, or he will try to get the attention of people around Wayne to assist him. Wayne's service dog is a life saver for him. All of these events have led to www.hearingimpaired.net and MrPaws by Snow (www.mrpaws.com) websites. 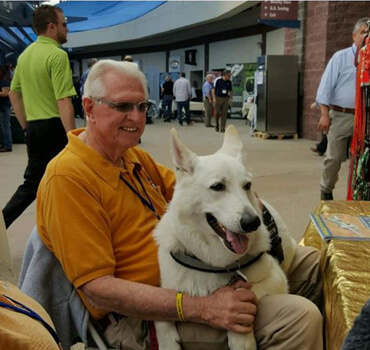 Careful thought and research went into the development of each item with one goal in mind - help the rest of the world to know that a dog is an essential part of your being. Part of the development of the products was to gather togather essential items in a Service Dog Package for people who don't know what they need. We quickly found that even if one receives a trained dog from an organization, that organization often does not go beyond the scope of training. Wayne and Anne Wicklund continue to grow MrPAWS by Snow (www.mrpaws.com) and hearingimpaired.net Inc. (www.hearingimpaired.net). They live with Snow in Fountain Hills, Arizona.